RI and New England fishermen have many concerns with the fast-passed push towards offshore wind energy. CFCRI is committed to voicing the concerns of the fishing industry throughout the planning process to ensure impacts are minimized. 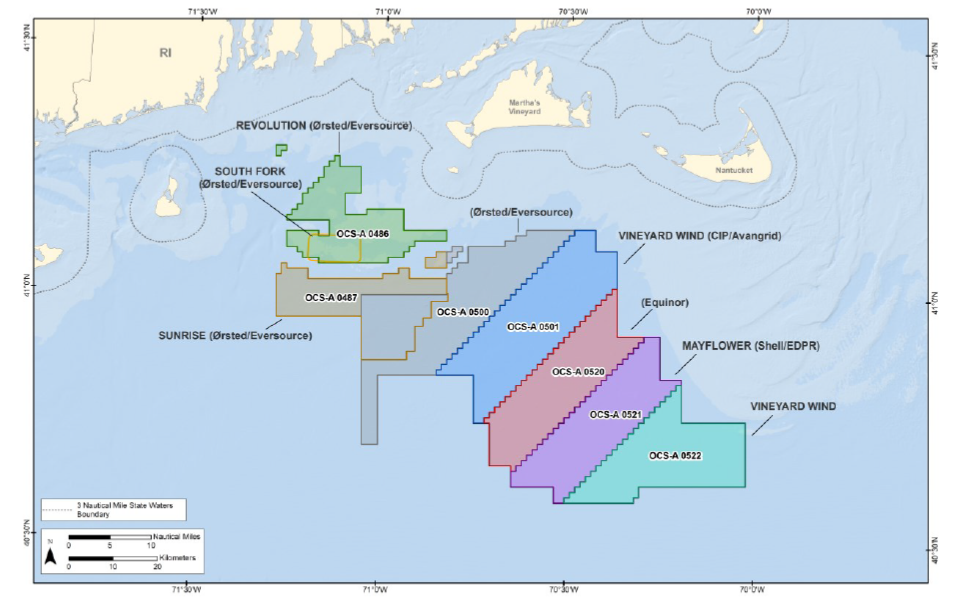 ​1.  Industry believes that there is political pressure on BOEM to develop Offshore Wind quickly. Concerns that BOEM will issue permits based on currently available info, that the industry considers inadequate.

2.  From a strictly operational viewpoint, placing turbines close to shore would lower construction cost, reduce maintenance and power transmission cost, as well as reduce impacts to fishermen.  However, landowners do not want to look at turbines in the sea.  Therefore, forcing fishermen to be the primary interest group and “collateral damage” as the US moves to develop offshore wind.

3. The fishing industry has expressed concern that the tradition of fishing, which is important to N.E.’s cultural heritage, is being lost. Although wind development is not the major contributor to the decline in fishing, it is yet another “nail in the coffin” for this industry.  Making it extremely difficult to maintain a healthy fishery.

4. The Industry is deeply concerned that the overall impacts of offshore wind will be negative for fishermen and that they will not be fully compensated for those impacts. These impacts can not be predicted with a level of confidence, that fishermen will be able to survive these impacts.

5. The uncertainty about the impacts of wind energy development is a major reason why the industry is opposed to wind development.  Before fishermen endorse wind development they want a much better understanding of the impacts on; (fish behavior, habitats fish rely on to survive, safety and navigation, social and economic impacts to fisheries and the ports they rely on).  In their view, the data are not collected correctly, nor collected on a sufficiently fine scale to be useful in determining impacts.  Lacking accuracy and inconclusive.

6. Industry is frustrated that wind development is being forced upon them at a time, after fishermen have been constrained over the past two decades to rebuild fish stocks.  Now that the sacrifices are beginning to bear fruit, the industry is concerned that they will have to accept further constraints due to construction and operations of the wind turbines.  Not to mention, potential of causing irreparable harm to the rebuilt stocks, causing a fish stock decline and economic hardship.

7. Industry is concerned that wind farms could become de facto marine protected areas, from which fishing is excluded.  If a serious accident were to occur, causing loss of life, property and or major damage to a wind turbine, there may be a risk that all fishing will be prohibited by the Fed. Gov’t. for safety precautions.

8. Lack of involvement in the planning process, particularly the ability to influence the final decisions on wind farm construction, turbine layout and operations.  This has caused a lack of engagement by the industry; the feeling is we met with the industry (check the box) but no one is interested or listening.  For a true collaboration, fishermen need to be an integral part of the decision-making process, not just occasional advisors.  An appropriate quote, “If you’re not at the table, you are on the Menu.”

9. Major long-term research is paramount and should be funded collectively by all Wind Farm Developers, with the funds managed by a Non-Profit Foundation with a history of working collaboratively with Academia, NEFSC and Fishing Industry.  Forming a working group of academia, scientist, mangers and stakeholders to set priorities to submit for RFP’s is necessary. Research must commence pre-construction to assess baseline of fish stocks, during construction and monitoring phase and long term 15 years or more to measure impacts and form mitigation strategy.

10.  It is important to establish a collaborative plan for damage to fishing gear and power cables, with an appropriate protocol for proof of damage, cost, down time, etc. utilizing a knowledgeable fishing industry representative and wind developer liaison to determine fair mitigation.

Using the links below, learn more about the MA/RI offshore wind projects and view the mariner updates.

CFCRI has continuly advocated for transit lanes are through the wind energy areas to ensure safe and efficient navigation for all mariners.

A workshop was held on October 31st to discuss transit lane options further, along with mitigation for Vineyard Wind.
A follow up meeting was held on December 3rd, find transit lane meeting reports below.
The US Coast Guard released a draft MARIPARS Report stating that transit lanes wont be needed in a uniform grid pattern of 1nm x 1nm turbine spacing. Comments due March 16, 2020 - Read the draft report and submit your comments to the USCG here:  https://www.federalregister.gov/documents/2020/01/29/2020-01522/port-access-route-study-the-areas-offshore-of-massachusetts-and-rhode-island